How to Throw a Balloon-Themed Party

Posted on October 11, 2012 by admin with Comments Off on How to Throw a Balloon-Themed Party 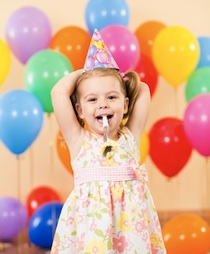 One staple of nearly every party is balloons. Whether they’re tied to the chair of the guest of honor, given to each attendee as they leave the party, or play a role in the party decorations, balloons are usually everywhere at parties. They add a fun touch to the environment, putting everyone in a festive mood, and can be used a variety of different ways. For instance, how fun would it be to have your guests walk through a balloon archway on their way into your house?  There are even balloon games you can play and food you can make that looks like balloons.  The sky is the limit when throwing a balloon party.

To use balloons in your invitations, you can hand-deliver a helium balloon to each of your guests with the invitation tied to the balloon.  Another option would be to print out the details for the party onto colorful printer paper and cut it out.  You should be able to get 4 invitations per 8 ½ x 11 sheet of paper.  Roll up the invitation and put it inside the balloon.  Now, blow up the balloon with helium or air.  With a permanent marker write, “You’re Invited” or “Come Float Away with Me” on the balloon and deliver it to the guests.  They will have to pop the balloon to get the party information out.

There are several ways you can incorporate balloons into your party decorations. Start by creating an archway of balloons for your guests to walk through on their way into the party.  Tie a string that is 12 feet long between two chairs.  Take one balloon and fill it with helium and tie it off.  Fill a second balloon and do the same thing.  Tie the two balloons together using the necks of the balloons.  Make another pair of balloons and then twist the four balloons together to form a cluster.   Twist the cluster onto the center of the string.  Continue making clusters and tying them onto the string until the entire string is full.  It will take about 78 balloons.  When you are twisting the balloons onto the string, try to attach them as close together as you can without sliding them on the string.  Now that your string is full you can take the ends of the archway off of the chairs and move it into place over your walkway.  Tie the ends of the archway to some balloon weights to make sure they don’t blow away.

To continue with the balloon theme, serve anything that is shaped like a balloon.  Peanut butter and jelly sandwiches can be cut out with a balloon shaped cookie cutter and served on a colorful tray.  Sandwich roll ups can also be shaped to look like a balloon.  Spread some whipped cream cheese onto a tortilla and lay thin slices of ham or turkey on it, leaving a border.  Roll up the tortillas into a pinwheel shape and slice.  Push the slices into the shape of a balloon and you’re done.

Balloon kabobs are simple to make with grapes and a skewer.  (Be sure to blunt the end of the skewer if the kids are helping make these)  Balloon shaped cheese and cherry tomatoes on a pretzel stick can also work for balloon shaped food.

Another idea is to order balloon shaped cake pops and sugar cookies, or to create your own ice cream bowls by using balloons.  To make balloon shaped ice cream bowls, blow up as many water balloons as you need bowls.  Next, in a microwave-safe bowl melt a bag of chocolate candy melts (don’t use chocolate chips because they won’t work).  Melt the candy melts according to package directions.  Lay out waxed paper on your table.  Dip each balloon into the chocolate until you get what looks like a good sized bowl and then lift up.  Let some of the chocolate drip off and then set on the waxed paper.  You will have to hold it there until the chocolate sets up just enough to keep it standing.  Continue dipping the remaining balloons in the same manner.  Once the chocolate has set up you can pop the balloons and gently remove them from the chocolate.  Your bowls are ready to use or they can be stored in a single layer in the refrigerator for up to 3 weeks.

Hand out helium balloons to the kids when they leave.  Between the candy from the piñata and the balloon you have a simple and inexpensive party favor for everyone.

Balloon parties are appropriate for children of any age and can be a lot of fun.  These are just a few ideas, and there are many more things that you can do with balloons, so be creative and involve the kids in planning their balloon party.